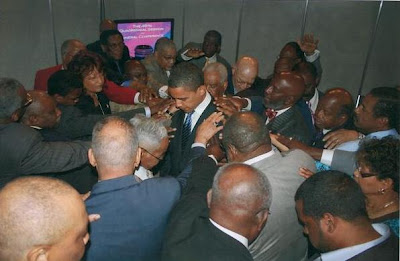 Whether you are happy about this week’s election results or not, all Christians must unite in prayer for our new president. Please do not forsake this responsibility.

It’s over. We’ve reached the end of the longest, angriest and most nerve-wracking presidential campaign in American history. Finally the “I approved this message” ads have ceased. The endless robot phone calls have stopped ringing. The debates, and the annoying post-debate comments from “experts,” are history—until the next election cycle.

More than half the nation is celebrating today while others are mourning. We are a divided nation, split into unhappy fragments by abortion, gay marriage, global warming, a failed economy and an unpopular war. Those who voted for Barack Obama have claimed a historic victory; some on McCain’s side are already looking for scapegoats. Politics is politics.

But when I got up this morning, I turned all my attention to the fact that Jesus Christ is still on the throne. His government is what is most important. Regardless of who sits in the Oval Office, the Bible says “the nations are like a drop from a bucket” to God (Is. 40:15, NASB). That includes the United States. We may boast about being “the greatest nation on earth,” but He who sits in heaven has a different perspective. Let’s take a big sigh of relief now and remember that God is sovereign.

I’ll admit this election did not turn out as I had hoped. I supported McCain primarily because I am pro-life and I prefer his small-government mindset. But now that the election is over, I’m not going to harbor bitterness toward Obama supporters or go into attack mode. Obama has been elected president of this country, and that means I have a biblical responsibility to support him in prayer—even if I challenge his policies.

Whether you voted for Obama or not, you need to pray for him. Here are 10 ways I plan to intercede for him regularly:

1. Pray for Obama’s protection. We already know that some weird, neo-Nazi fanatics in Tennessee plotted to kill Sen. Obama during his campaign. Let’s pray that racist hatred is not allowed to spread. Let’s cancel every assassin’s bullet in the name of Jesus. May civility triumph over bigotry.

2. Cover his wife and daughters in prayer. It is not easy to live under constant media scrutiny. Pray for Obama’s wife, Michelle, and their two daughters, Malia and Sasha as they face invasive cameras, nosy reporters, maniacal fans and dangerous enemies. Obama is not only a politician but also a husband and a father.

3. Pray that Obama will govern with God’s wisdom. God rewarded Solomon because he asked for wisdom instead of wealth, long life or vengeance on his enemies (see 1 Kings 3:11-12). Pray that Obama will order his priorities like that. Despite Solomon’s tragic character flaws, his legacy was wisdom. We can ask God to give our president the same grace.

4. Ask God to keep our president humble. Many great American leaders became corrupt after they moved to Washington. The fatal attraction of fame, wealth and power proved irresistible. The only thing that will guard a man or woman from this pitfall is humility. May God deliver President Obama from the curse of pride.

5. Pray for wise and righteous advisers to surround him. Godly leaders cannot do their job alone. Even the best leaders have failed because they trusted the wrong people. Pray that Obama will not select his counselors based on party, race, pedigree or political cronyism but on godly character and proven wisdom. Pray also that he will not allow secret traitors into his inner circle.

6. Ask for the spirit of reconciliation. Some segments of our deeply divided society want nothing to do with Obama now that he has won the presidency. Even some Christians will be tempted to harbor resentment and nurse political grudges throughout his term in office. Pray that God will grant forgiveness and healing so that leaders on all political levels can have constructive dialogue.

7. Pray that Obama will adopt pro-life convictions. Many politicians have changed their views on key issues while in office. In the 1800s some leaders who favored slavery later denounced it. In the 1950s some who opposed racial integration later became champions of it. Even though Obama won approval from many voters because he sanctions abortion, God could soften and change his heart.

8. Bind all evil forces assigned to manipulate our president. The specter of Islamic terrorism looms over the United States, and dark forces are ready to infiltrate. Our only hope lies in prayer to the God who is able to expose and outwit the schemes of the wicked. This is truly a time for spiritual warfare, and intercessors must not come off the wall in this hour! Pray that no foreign government, terrorist organization or demonic principality will use Obama as a tool. We must stand strong against the spirit of antichrist that promotes dictatorship, persecution of Christians and hostility toward Israel.

9. Pray that Obama’s door will remain open to the church. The loudest voices of secular culture—from Bill Maher in Hollywood to atheists in academia—would be happy if religion were removed from public life. Pray that Obama, who claims to have a personal faith in Jesus Christ, will unapologetically welcome Christian leaders into his company and seek their counsel. And pray that false religious leaders (who claim to know Christ but deny His power) will not have his ear.

10. Pray that our nation will enjoy God’s peace and blessing during the Obama administration. The apostle Paul instructed early believers to pray for all in authority “so that we may lead a tranquil and quiet life in all godliness and dignity” (1 Tim. 2:2, NASB). God’s will is for America to experience peace and prosperity so that we can continue to export the gospel to the nations. This must happen whether a Democrat or a Republican is in the White House. As we cry out for God’s mercy on our wayward nation, pray that He will allow us to be a light to the world as we finance global missions, feed and heal the world’s poor and share Christ’s love at home and abroad.

← The Power of Prayer and FaithAs promised, although late…B-day party pics →