I know you guys are eagerly awaiting updates on the kids and I apologize for not posting sooner..but so much has been going on (as you can imagine with three littles)…I thought I would break it down into 3 posts by child….

This post I will update you on E (aka Chocolate Thunder aka Giggly Puff aka Chunky Monkey….aka well you get it….lol) 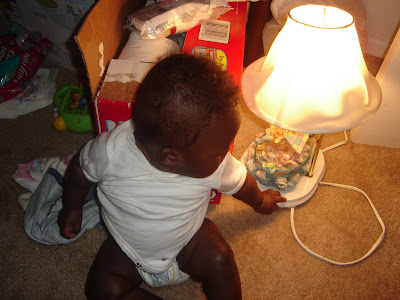 I was really shocked at how big he was….The official weigh in is 21 lbs….Yep he is a big boy…

He was kind of cranky and irritable the first few days..but has transitioned nicely and is actually a pretty low maintenance child…..He is such a joy to be around…He is so sweet…

He is learning to hold his bottle, but still can’t sit up without support

This is his 4th home since he has come into foster care in Feb. and he is only 6 months old..(sad, I know!)

He loves my mom..he actually prefers her over me (or anyone else for that matter) I try not to be offended..but I’m like, Hey kid..Who feeds you everyday?..lol

He does not like D (aka Destructo)….they do not get along….but we are working on that..they are only 7 months apart…and both VERY MUCH “the baby”…B aka Boogy absolutely loves E……..He gets mad when anyone comes near “his baby”

E has been sick the past couple of days. I had to take him to the ER Sunday morning….he was running a high fever…Turns out it was a Urinary Tract Infection….

It is expected that he will stay with me at least six months and then will go back to his mother…..so I’m going to love him as much as I can while he is here…..

Final Thoughts…
To be continued…..