Well I was wrong about the ages of Boom Boom and the Munchkin….
Boom is actually 2 and the Munchkin is actually 1.
So that’s right I have :
Two 2 y/o
Two 1 y/o
and an 11 month old….
They actually spent the whole day with me Saturday because mom had to go to work….I took mom to work….Everbody thinks I am being used, but I don’t see it that way. I don’t mind helping her out. I TRY not to be judgemental of her or her situation and I would rather for her to be able to get to work so she can provide for her family than for her to just sit home collecting assistance.
People have such a negative opinion of people whose kids are in foster care, but I can say that the ones I came across just needed someone to support them. Their mom really has no support system. She told me on the ride over there to her job that she was a foster child herself. I’m not making excuses for her because there are times when I get extra mad at some of the things she does concerning CT and showing favortism to her other kids, but I try to put myself in her shoes and wonder if I grew up like her would I be in the same exact situation? 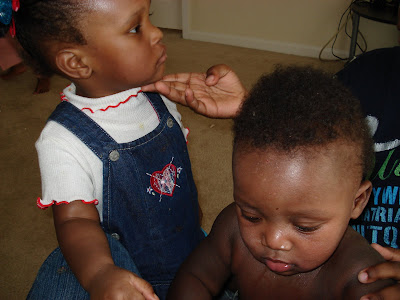 The Munckin and Chocolate Thunder

But anyhooLater that night, when I went to drop them off home Boom Boom had a major blow out…He did not want to stay with mom. He actually hit mom and proceeded to throw a major tantrum…..I had to go in the house and calm him down and promise him I would come back…….I felt so bad for mom…..She is already struggling with how much CT is attached to me and the fact that Boom Boom did the same exact thing as CT when I dropped them off, isn’t really helping things much…(SIGH) 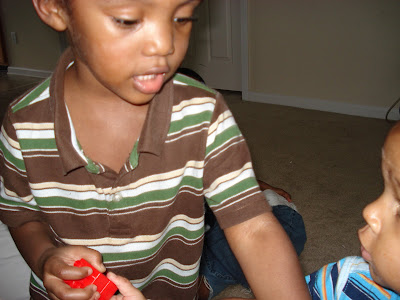 Boom Boom (left) and Destructo (right)
I was loving up the Munchkin all day. She is so sweet and quiet and she likes to be held and cuddled and I was more than obliged to do so….It is so fun having a little girl!
Final Thoughts:
Please be praying for CT’s mother